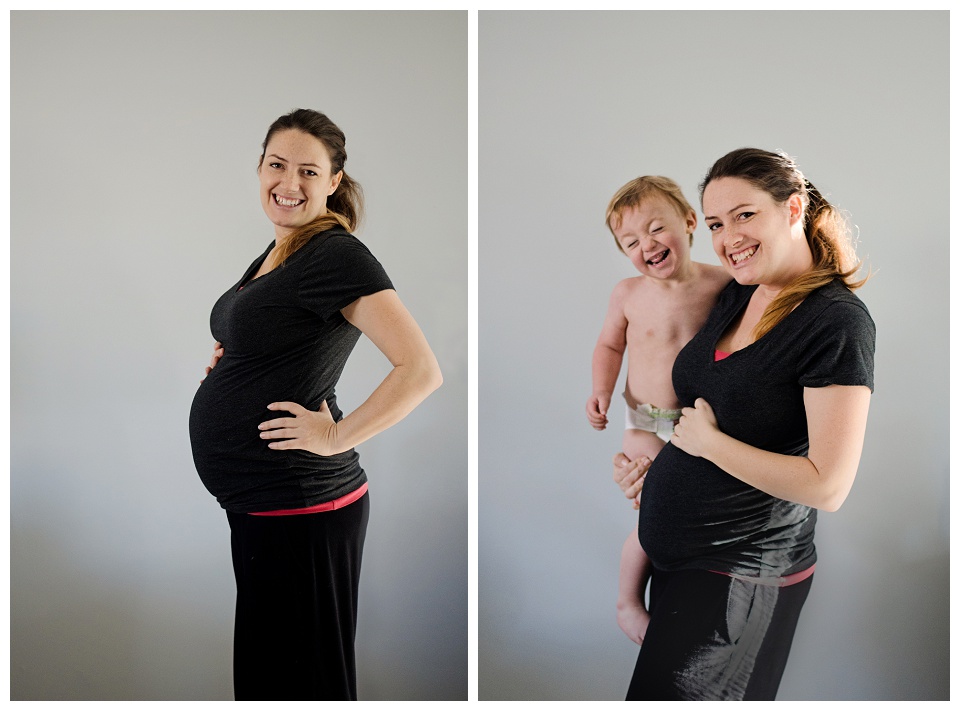 This is the moment I have been waiting for! The blessed 2nd trimester! As it did with my first pregnancy, it just seems to gradually fade away, slamming me with one final bout of awful pukey-ness as a not-so-pleasant farewell.

I actually began writing my first weekly update at 15 weeks, then I slacked off on taking a bump picture and it turns out that my blog post draft never saved. So, here I am starting over with you at 17 weeks! Even that is a little inaccurate because today marks 18 weeks. Oh well, the photos are from 17 weeks and I don’t believe anything has really changed much. Although I was feeling much more eloquent and clever that day… I apologize for how ordinary this one will be. Oh and yes, I realize my belly is already huge… sigh.

Here is a quick recap of my first trimester, now that I’m beginning to emerge from the fog. At exactly 6 weeks I began to feel daily nausea along with complete exhaustion and fatigue. I lost my appetite and forced down just enough food to keep me alive but there was no joy in it. I can’t help but compare this pregnancy to my first, it’s all I’ve known until now. I can’t tell if I have it any better or worse this time when it comes to my sickness and symptoms. I can tell you that with Miles, the very first symptom I had was a heart-rate that shot into the 100’s and that continued until well into the second trimester before it dropped to a normal rate. This time I didn’t have that, but I have had heart palpitations now and then. With my first I had the luxury of laying down if I desperately needed a nap or if I couldn’t stand without barfing. This time I am a full time mother and part time artist with a business, so I have been defying the odds by barely holding on. I’m truly shocked I made it sometimes. After one day of being sick, the memory of the misery returned. In some ways it feels like losing 3 months of my life. I plodded along. I will say that I vomited a bit less this time and my nausea was sometimes more bearable (likely out of necessity, but I’m still happy about it).

This post really feels so boring and blah blah. Also kind of gross. Enough of that…

Let’s emerge into the current symptoms of the second trimester! Yay! The last week has been pretty great. I got sick 3 times in less than 12 hours, but I think that might have been sort of a grand finale of it all, because most days I have had motivation, an appetite and spurts of energy. The fog has lifted somewhat and I’m beginning to feel more like myself! I’m starting to have cravings and get pleasant hormonal feelings (ones that make me want to cuddle my boys and organize junk).

Before I blab you to death, I’ll just post the categories I used for my first pregnancy and update you that way.

Baby’s Size | Pear. See, I knew there was a better comparison out there than the one I used for my first 17 week update.

How far along | 17 weeks. Well technically today makes 18, but the update and photo are from 17 weeks.

Sleep | Considering I have had a child sleeping with me for the past 2+ years and I’ve been waking up 3-4 times a night to nurse him back to sleep, things are wonderful. Such different expectations than the first time, haha. The great news is that Miles has finally been sleeping completely through the night without waking for over a month now! So these nights I just wake myself up to go to the bathroom. That’s okay though, I would prefer that any night, thank you.

Clothes | I have basically been wearing the same thing since I was pregnant with Miles almost 3 years ago… but I have never had to wear cold-weather maternity clothes so I’m already to the point that many of my shirts are fitting strangely. I have a few long-sleeve maternity shirts but I’m dreaming of some huge, comfy hoodies and cardigans.

Cravings | This has been covered somewhat, but I am just happy to have cravings! I’ll list some of the most significant cravings starting with the strongest and most consistent, meatball sub from Subway with pepperoni, pepperjack cheese and jalepenos. I’m weird. I’ve also been craving all things red sauce, both pizza and pasta, jalepenos (as stated) and lemonade and salad (those last two were the same with Miles.) Some lesser cravings are wheat thins with cheeseball type dips and grapefruit.

Food Aversions | Still not feelings much love for garlic, strong onion flavor and BBQ (which is weird because that was a huge craving with Miles). Heavy soups and thick casserole type foods sound yuck.

Symptoms | I just re-read my 17 week post from last time and realized my symptoms are quite different! Yes, the baby brain, but I don’t feel swollen or racing heart. I have been feeling braxton hicks already, which is crazy because with Miles I didn’t feel them until well into the 3rd trimester! I’ve also had sore ligaments in my pelvis, really sore and weak hips and lack the energy I wish I had to work on projects lately. The nausea is fading, though, yay!

Doctor’s Appointment | I put off finding a new doctor and making my first appointment until around 14 weeks. Now I have an appointment December 11 and that is also when we’ll have our 20 week sonogram and find out if it’s a boy or girl!

Movement | This is a tricky one! I think it’s because I’m having trouble remember back any farther than what it felt like to have a bigger baby in there, really moving around and jabbing my insides. I can’t seem to remember what the flutters feel like. I’ve had trouble distinguishing between gas bubbles and actual movement until this week. I’ve had a few distinct moments where I’ve been certain it’s a baby in there and not flatulence, lol.

Belly Button | Innie. Barely. I should not be this close to an outie yet, IMHO.

Gender | This is constantly on my mind. I love the idea of having a girl next, but I also have realized how awesome it is to be the mom of a boy. I’d obviously be thrilled either way but I’m dying to know so I can visualize better the little being living within me. We’ll find out December 11 and I have a really cute announcement photo planned, I just have to make that happen.

Best moment of the week | When Miles randomly took notice of my belly and said “Brother, sister?!?!” very excitedly. I also loved the distinct kicks and feeling the fog lift a bit more.

What I’m looking forward to | Finding out the gender, feeling kicks from the outside and hopefully finding some huge hoodies to lounge in.

What I miss | As with my first, I keep craving alcoholic drinks, which I never really drank before being pregnant anyway. I also miss all the other things I can’t have, like hot tubs and roller coasters. Also someone mentioned how I probably cant ice skate if I’m pregnant and that made me sad and made me realize I really wanted to ice skate all of a sudden.