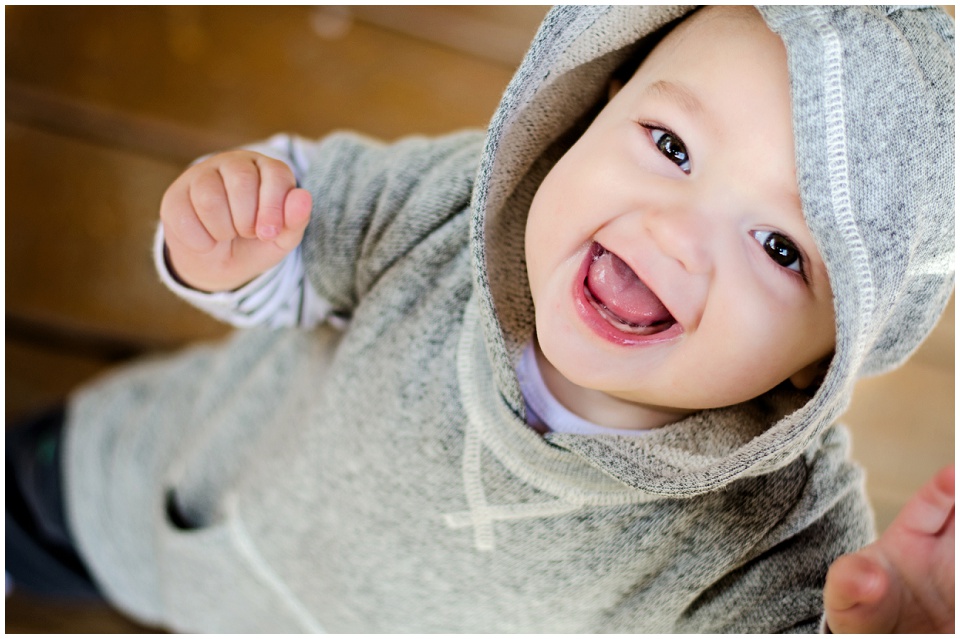 The other day Steven asked me “Do you realize it’s only a few months until Finn’s first birthday?”

I then replied “Hush your mouth!!!”

Finn has reached new levels of cuteness and bigness this month. He took his first step a few weeks ago and he can now take anywhere from 3-10 steps in a row before losing his balance. I’m not sure when it’s officially labelled “walking,” but we’re pretty close to calling it that. He’s been munching on every food he can get his hands on (and some things that are not food). Doc says we can pretty much feed him anything if it’s small enough. I’m still hesitant because that’s just my nature, so we haven’t been as adventurous as Finn would like. He especially loves when I eat an apple and let him have the core. I haven’t decided yet how that reflects on me as a parent.

Our big boy is fitting comfortably in 18 months clothes and uncomfortably in the 12 month things I’ve been too sad to store away. Finn and Miles were born in opposite seasons, so it’s been tough to keep this kid in clothes before he outgrows the hand-me-downs.

During the couple days of warmer weather we were blessed with this month, I took the boys outside and played in the sun. I can’t wait until Finn can run and explore once we officially welcome springtime. I think he’s a big nature kid and I love to see him light up when he finds something new to stare at when we’re playing outside.

Finn has the most adorable little laugh! He has one particular type of laugh that he saves for Daddy when he gets home from work during the week and it’s so cute. He also will fake laugh when he notices the rest of us laughing. He’s been clapping and banging things around. He makes all kinds of noises and seems to come up with a new one every day or two. Most of them are growls and raspberries and I adore it. Watching Miles be crazy is still one of his favorite things. He tries more and more now to join in the game. I think I’ve mentioned this before but Finn is obsessed with baths! If we’re upstairs in the hallway and I let him down, he’ll head straight for the bathroom and pull himself up on the tub and squeal eagerly. He has three teeth now, the last one which seems out of order since it’s second from center on the top, even though he doesn’t have any other top teeth. Hehe!

I feel like I’m leaving stuff out because he’s so stinking cute there has to be a books worth of notable things I should share, but I guess I’ll stop there. Time to start soaking up month ten!