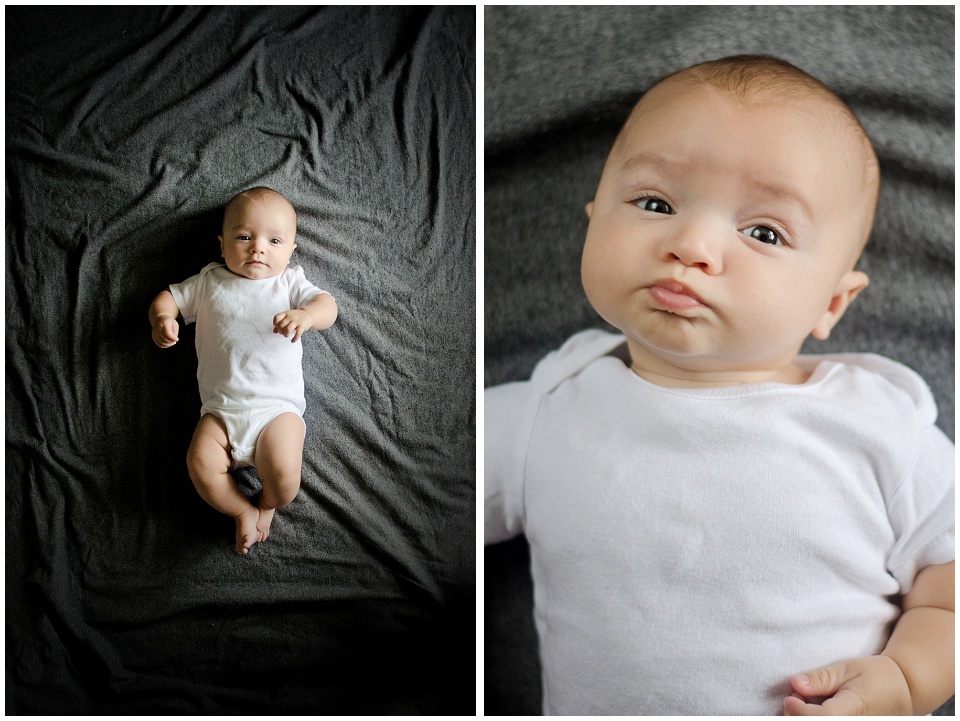 The first three months of Finn’s life have shot past me at lightning speed. I was so busy just keeping my two kids alive and making sure I remembered to feed them, I didn’t have time to notice how much Finn had grown! Then we visited my family and had a chance to meet the new cousin, who was just a few days old. It was then that we all took notice of the beefy baby Finn had become! He was less than three months old and already outgrowing all his clothes. Within this week I realized he had mastered head control and was turning into a massive, studly baby that could rival the heftiness of some one-year-olds! I was then forced to accept that he had long surpassed the newborn phase and was likely to pop the snaps off of his 3-month sized jammies. Because both my babies were big and born during opposite times of the year, all my boy clothes in his new size were sweaters and long-sleeve onesies. So we made a trip to Carter’s and purchased a slew of PJ’s and onsies for my summer baby. The 6-month PJ’s we got him will probably only fit him for another month because he’s so long. It’s crazy. He’s also wearing some 9 and 12 month clothes that I dug out from storage.

He just rolled over for the first time from tummy to back. In protest of tummy time, I am certain.

He really dislikes his car seat. If it’s nap time, he’ll fuss until he falls asleep but if he’s wide awake he will scream in anger until you pick him up and play with him, then he’s the calm, laid-back baby we all know and love.

His eyes have been the vague blue of a new baby until recently. I discovered streaks of brown leaking into his eyes and I find it beautiful! I’ve posted a closeup of his eye below so you can see how adorable it is.

Returning to the topic of Finn’s amazing sleep habits… he has slept 9 straight hours twice during the last three nights. I am scared to think this will become a regular thing, but I’m hoping. Not one single time did Miles sleep that long at once during the first two and a half years of his life. I almost don’t know what to do with myself. I can scarcely believe it. Ok. I’m done being in shock.

Finn is a talker. He loves to tell stories. I like to say he’s a preacher like his daddy. His coos are deep and insistent and match his gaze perfectly! I’m excited to see how our conversations will evolve.

Finn has been only moderately okay with a pacifier since its introduction and now that he’s learning to control his hands better I’ve discovered he prefers to suck on his fingers. Just today he’s abandoned his pacifier in favor of his two chubby little fingers during both naps. Oh gosh.

Overall he’s a very laid back little lad, but he’s especially happy when he can be carried around in the moby wrap or someone’s arms, or propped up so he can watch the world around him.

Speaking of propping up… he is insistent about trying to sit up and stand whenever we will allow it. I’ve heard that’s a no-no at this age, but he loves it so much that I’ll often let him stand up on those massively chunky legs of his and smile at me with pride.

Ok, that’s a good recap of this month and a peek into the personality of my baby boy #2. I love him more and more every day and it gives me immense joy to watch the light of his spirit glow brighter every morning. 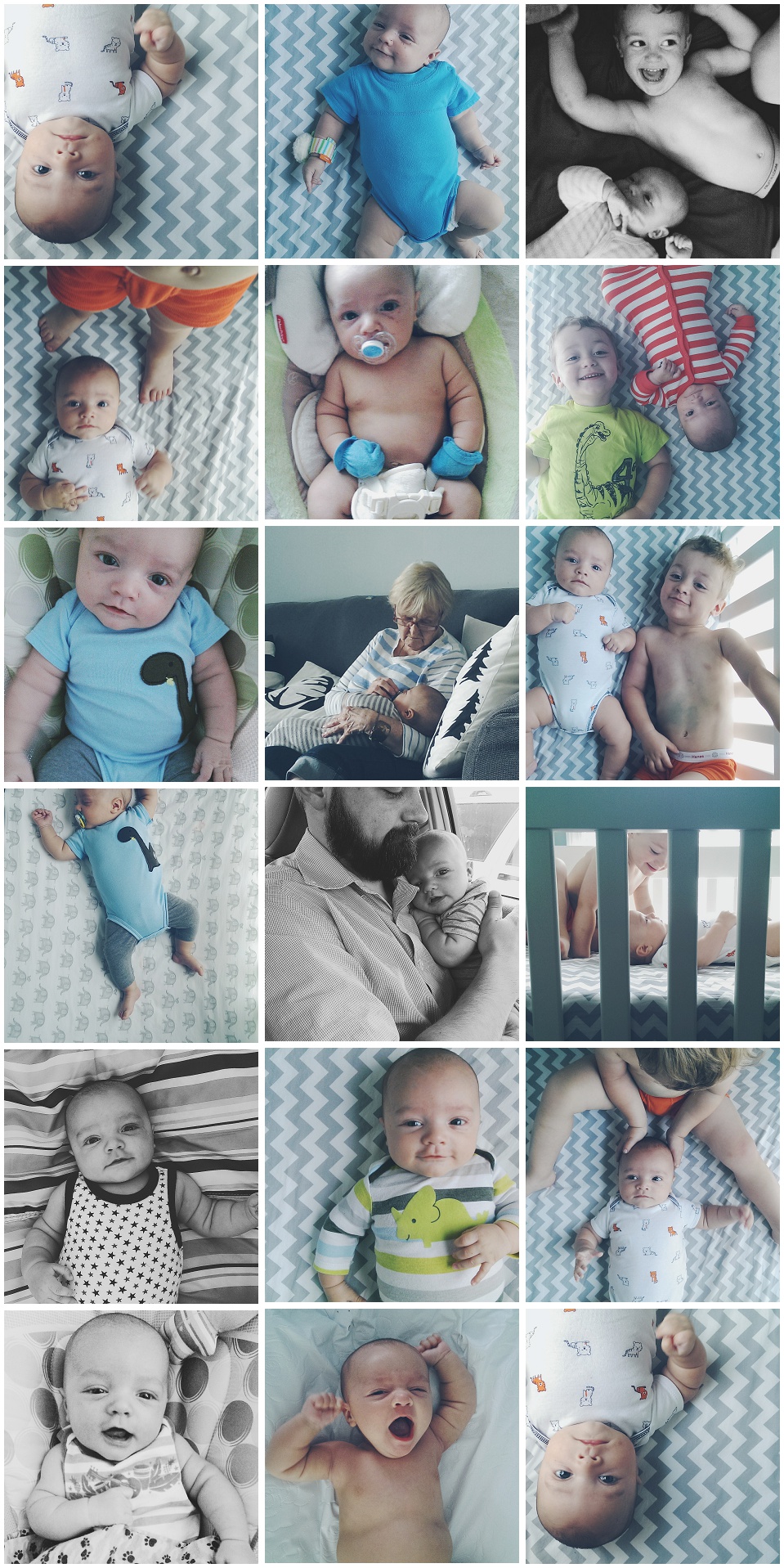 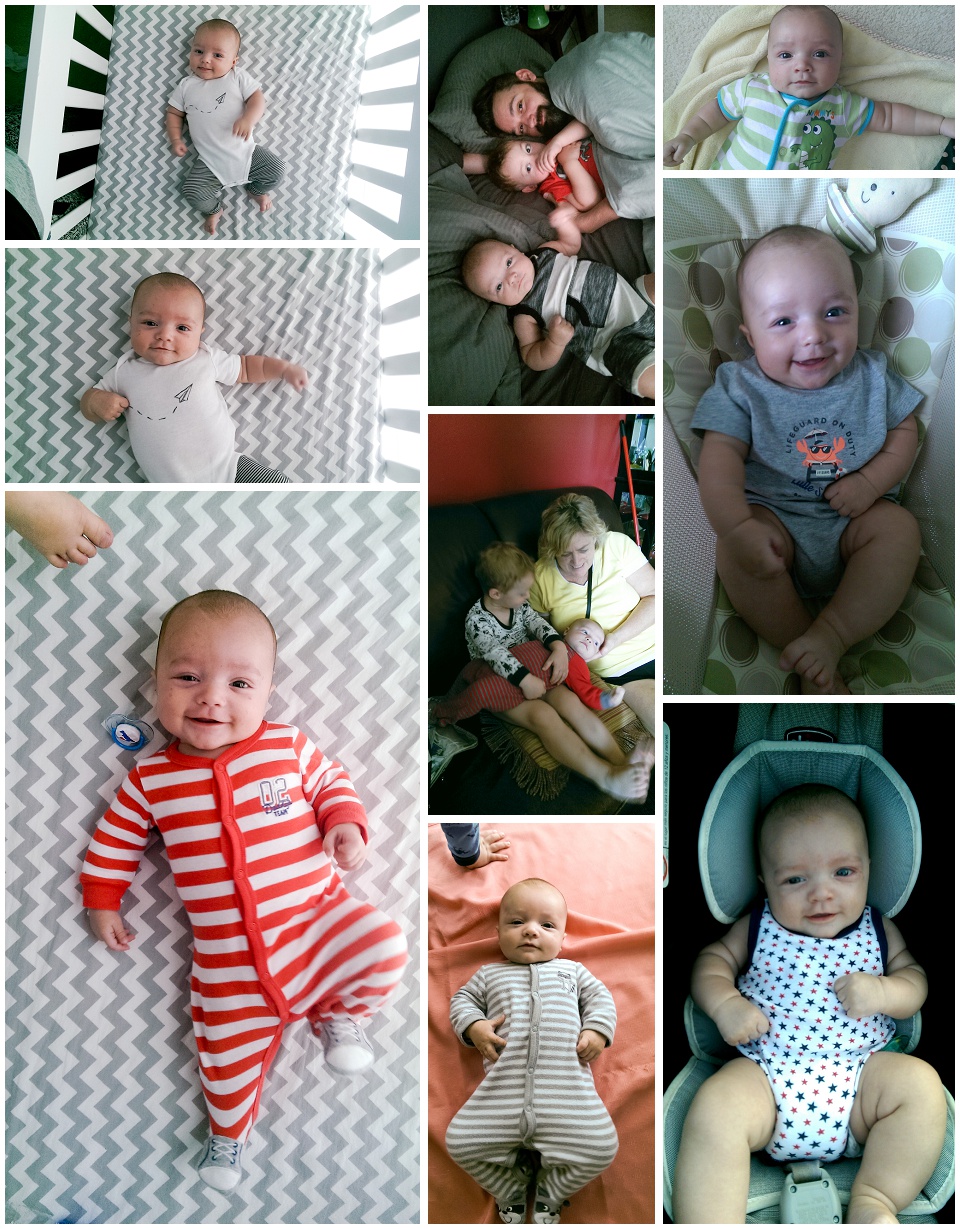