I was slacking so much on my updates towards the end that here I am posting it 2 full weeks after having my baby!!! But I already prepped the whole post so I thought I would still post it before I updated the world on the amazing new arrival in our life. :)

Here we are. Exactly a week until my due date. Can’t believe how fast time has gone! So what has the thirty-eighth week of pregnancy been like? It has been heavily influenced by thoughts of labor and birth and brand new baby boy. I finally can say that all my client work has been completed! I finished it all and sent out bills and today I plan to completely clean off my computer desk so when I sit at it I don’t feel scattered and overwhelmed. It is going to be great. I still haven’t really accomplished anything that was on last week’s to-do list. Oops. But I have made tiny little steps of progress in those directions. Another word to characterize this week: Sleep. I think it’s probably primarily due to the fact that I know my work is finally done and I am allowed to sleep. I also know it is common to be tired a lot in your third trimester. I keep waiting for my nesting urge to hit big time like I’ve heard it does, just so I can wrap up the rest of my list, but it’s not coming. Honestly this is a good thing because we kind of want baby to hang in there just a bit longer. I have forced some productivity but even tiny tasks seem so daunting when I’m this tired. Oh, I have also been suffering a delightful bout of allergies. Thank you weather change. For real, though. I’m ok with it, if it means cooler weather and the coming of autumn. Right now I have that lovely “sexy voice” of deep congestion and have used up several boxes of tissue. It makes my brain twice as foggy and encourages my desire to be comfortable and rest constantly.

Let’s talk about a few more exciting things. I made or had a hand in making 3 pies this past week! It makes me feel like I am actually able to celebrate the season, even feeling the way I feel, plus it gets me excited for the uncharted territory of mommy-hood as fall approaches. I also was able to get my car back in working order after the starter went out and had put it out of commission for a couple weeks. I did, unfortunately become the victim of a flat tire the next day, so I had to do without once more, but it is back now and freedom is mine once again! I picked up my framed artwork for the baby room and I’m so excited to hang it! The mats on the old frames I used are a little off-white from the “look” of the room, but I still love it and am anxious to see it all together. Uh-oh. All this talk is making me want to accomplish things! Lol.

Steven and I are both dealing with what I imagine are typical feelings for first-time parents. We’re anxious and excited and feel un-prepared but completely impatient at the same time. Because of this, I will occasionally refrain from alerting daddy-to-be to any new change in my body unless I really feel like he needs to know. I’ll tell him, but usually not until after the fact. For example: “Hey sweetie, so last night I had what felt like some pretty intense Braxton Hicks that were consistently ten minutes apart, but they didn’t get stronger or closer together, so we’re good.” If I had told him at the time I was feeling them, he probably would have freaked out. Lol. This doesn’t mean I’m not scared of having to make the “is this true labor” determination on my own. I almost feel like I am trying to will my body not to go into labor unless Steven is around. But I know the chances of that aren’t very high, so I just try to stay calm when I’m at home during the day (without a car, haha) and remind myself that everything is going to turn out exactly how it should. 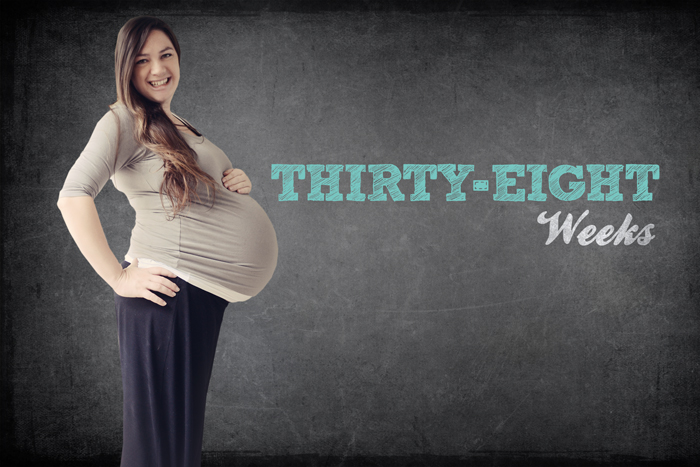 Sleep | Yesterday morning I woke up at 3 a.m. and could not get back to sleep. Steven was awake and unable to sleep either and I felt bad. So I let him get back to sleep while I watched some TV and ate some yogurt as I suffered a rare instance of heartburn and waited until he woke up for work. After he left I started where I left off last week, packing the hospital bag and made another dent in that. Then I sat to watch more TV and fell asleep around 9 and slept until almost 2 p.m.! Such a weird night/day. Other than that I just do what I can to stay in a rhythm of sleep, wake, pee, turn, sleep wake, pee, turn. And I nearly always have a Braxton Hicks contraction every time I get up to pee and I don’t know which one causes the other.

Clothes | HA! I garb myself in anything that will cover my full belly, allow freedom of movement (waddling) and doesn’t smell entirely gross already.

Cravings | Honestly, I haven’t had full on cravings for awhile. That was more of a first and second trimester thing for me. These days I would say my food intake is evenly split between semi-healthy sustenance for meals and indulging in a thing or two that sounds yummy at the time. Things I’ve really enjoyed eating the last week: Pie, Dr. Pepper, Cheese Danishes, apples, yogurt. That’s pretty much in order, too.

Food Aversions |  I find hunger alone to be distasteful.

Symptoms | Well here is a joyous development! I lost my mucus plug last Thursday. You may now go back to pretending you didn’t just read that. I also have had a zillion Braxton Hicks a day, it seems. They do seem to be stronger and at times more painful, but they just end with me having to take a trip to the bathroom or sitting. They scare me sometimes, but at the same time I like it because I feel like it means things are just continuing to progress as they should. I just have a general feeling of “it’s almost time” and little by little I am marking things off the “preliminary signs of labor” list. Ahhh!

Doctor’s Appointment | At last week’s 38 week appointment I was officially a 1 and “soft.” I wish she had been more specific about that, this week I’ll be asking her about my effacement. His head is in a great place and he is measuring just about right (she didn’t tell me the exact measurement but I’m thinking it’s within a centimeter of the typical 38 that would be expected for the week). Everything is looking great. My Dr. pretty much said we’d discuss induction this week, not that she thinks we need to yet, but just to schedule something should I go over my due date. I think she said if I’m more than 5 days overdue we’ll induce? I really really really don’t want to be induced, so I’m praying he comes within a few days of his due date, either way.

Movement | He feels so big! When I feel his butt and foot at the same time I am in wonder at how far apart they are! Sometimes I feel like his foot is coming out my side and couldn’t possibly still be in my uterus. I just like to rub his little body however I can and reassure him that the time will come for him to enter the world and then he’ll have so much space he won’t know what to do with it all.

Belly Button | Outie, obviously. Since it has been for a couple weeks. It feels and looks so weird. It doesn’t “poke” as much as I thought it would, but I guess that’s just how my belly button is.

Best moment of the week | It was probably when I finished all my client work and realized that when my exhausted body begged me to lay on the couch all morning on Monday, I realized I actually could do that and it was ok.

What I miss | Maneuvering around people and things and just basically walking (up stairs, through hallways, within crowds) and not having to think of every move and every step consciously to avoid bumps, pain and falls.